Is the CDC Lying? You be the Judge

Rodef Shalom 613 > Government and Industry > Health Agencies > CDC > Is the CDC Lying? You be the Judge

The CDC website asserts that vaccines do not cause SIDS.1

Are they telling you the truth?

Why should you be a critical reader?

Do you take this statement at face value, noting that they even have seven “related scientific articles” referenced at the bottom of the page, as proof? Or, do you check their claims? If you click on the study links, you are often taken to abstracts; sometimes the whole article is behind a pay wall, making it difficult for the average reader to access. However, the abstract doesn’t always tell the reader the whole story, and may even be biased, missing important information. Or you may be shocked by what you find. Here’s a closer look at just two of the “related scientific articles.”

The first study was performed by Harvard Pilgrim Health Care, Inc. and submitted to the The Agency for Healthcare Research and Quality (AHRQ), U.S. Department of Health and Human Services. It is not a vaccine and SIDS study. Although SIDS was an adverse event reported, the study was conducted to find adverse events that were disproportionally reported following DTaP vaccination based on adverse events reported to VAERS, the Vaccine Adverse Event Reporting System. It should be noted that a review of VAERS concluded that fewer than 1% of adverse vaccine reactions are reported2; another study estimated that only between 5-10% of all adverse events related to the varicella (chicken pox) vaccine are reported to VAERS3.

Here is the abstract:

Methods: We searched VAERS for US reports of DTaP vaccinations occurring from January 1, 1991, through December 31, 2016, and received by March 17, 2017. We reviewed available medical records for all death reports and a random sample of reports classified as nondeath serious. We used Empirical Bayesian data mining to identify adverse events that were disproportionally reported after DTaP vaccination.

Conclusions: No new or unexpected adverse events were detected. The observed disproportionate reporting for some nonserious vaccination errors calls for better education of vaccine providers on the specific indications for each of the DTaP vaccines.”4

Here is what the actual study includes, and which was omitted from the abstract.

Based on the estimates referenced above of extremely low reporting rates, SIDS deaths may actually have been anywhere from 3,500 to 35,000.

Their explanation for SIDS deaths bears analysis. They wrote:

“Among death reports for which sufficient records were available for review, SIDS was the leading cause of death (48%), which is consistent with infant mortality data that places SIDS as the fourth leading cause of death in the US among infants [36]. Similarly, SIDS was the second leading cause of death among children aged 0–18 months in the VSD [37]. A recent study in Taiwan assessed the risk of sudden unexplained infant death (SUID) following DTaP which was introduced in that country in 2010 [38] and found DTaP did not increase the risk of SUID. SIDS deaths in the US have been declining since the early 1990s for a variety of factors that include recommended changes in sleeping position and environment, clarification of the case definition, and diagnostic coding shifts [39–41]. There is a large body of evidence showing that vaccination is not causally associated with SIDS [42–44], including an Institute of Medicine (IOM) review in 2003 that rejected a causal association between the whole cell pertussis–containing vaccine (which is no longer in use in the United States) and SIDS, and between exposure to multiple simultaneous vaccines and SIDS [41]. It would not be uncommon to observe a coincidental close temporal relationship between vaccination and SIDS as this condition peaks at a time when children receive a relatively large number of recommended vaccinations [44]. Other common causes of death observed (e.g. asphyxia or suffocation, pneumonia, sepsis or septicemia) are consistent with the top ten leading causes of death in the vaccinated age groups [36].”6

Regarding their claim that the SIDS death rate of 48% is consistent with overall US infant SIDS rates – one has to wonder why SIDS rates are so high in the US and also realize that infants all over the US are being vaccinated with the DTaP so the 48% rate can be a reflection of vaccine associated SIDS across the nation. This report was published in 2018. A 2011 report, ‘Infant mortality rates regressed against number of vaccine doses routinely given: Is there a biochemical or synergistic toxicity?'7, showed that infant mortality rates rose with increased vaccination. The United States has one of the most highly vaccinated infant populations and one of the highest infant mortality rates among developed countries. See tables below. Furthermore, of 131 approved causes of infant death, vaccines are not one of them; coronors would have to list suspected or confirmed cases of vaccine related deaths as SIDS or some other cause.8

The authors wrote that two reasons why SIDS rates have gone down in the US is because of “clarification of the case definition, and diagnostic coding shifts”.  This seems to be an attempt at obfuscation, since  overall infant mortality rates have not gone down; they were simply renamed “suffocation in bed and unknown causes” as shown by the chart below. A SIDS diagnosis in and of itself is supposed to mean death from unknown causes.9 This also means that the referenced “back to sleep” campaign did not reduce infant mortality, as had been alluded. Therefore, any reference to a decrease in SIDS is disingenuous. 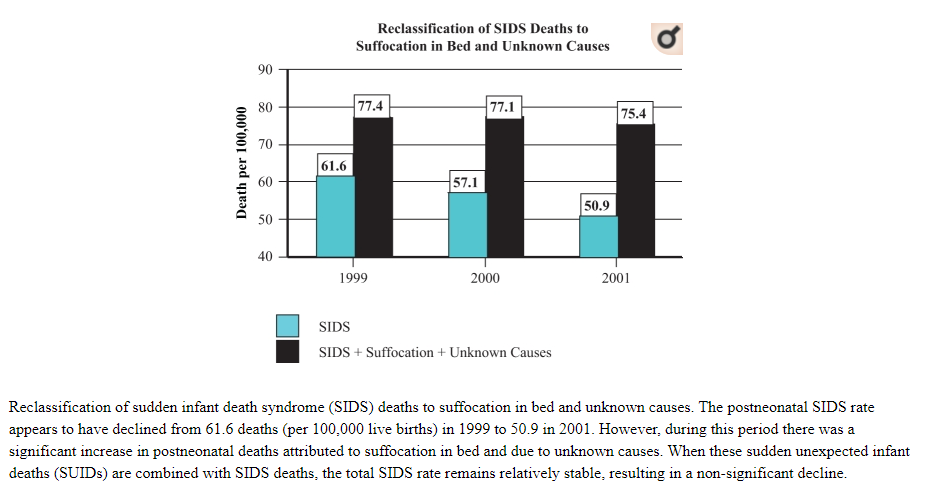 While the Institute of Medicine (IOM) review in 2003 did indeed reject a causal relationship between the whole cell pertussis–containing vaccine (which is no longer in use in the United States) and SIDS, and between exposure to multiple simultaneous vaccines and SIDS, they did not have actual evidence that the DTaP vaccine does not cause SIDS. They said: ” The committee concludes that the evidence is inadequate to accept or reject a causal relationship between the DTaP vaccine and SIDS.” They assumed that there was no relationship between DTaP and SIDs based on their experience with the DPT vaccine.10 However, the ingredients in the DPT and DTaP are not the same. The DTaP contains aluminum, a known neurotoxin11.

This information alone would serve to destroy the IOM conclusion that multiple vaccines given at the same time would not lead to SIDS. However, there is more.

What does the vaccine package insert tell us?

The information in the vaccine package insert for Infanrix®, one of the vaccines assessed in the study, also raises questions about the correlation between the DTaP vaccine and SIDS. Sudden Infant Death Syndrome was a reported post-marketing adverse event listed in section 6.2 of the insert. Below are two different inserts for this vaccine, one from June 2019, and one from June 2020. (Neither insert lists a revision date.)

Understanding the terminology used for the adverse events is enlightening. Encephalopathy is brain damage, cyanosis means turning blue from lack of oxygen in the blood, and apnea is a serious sleep disorder where breathing repeatedly stops and starts. These alone could be responsible for SIDS.

Oddly, Sudden Infant Death Syndrome is the very last item, stuck at the end of the category “General Disorders and Administration Site Conditions”.  Do you think that’s where it belongs? 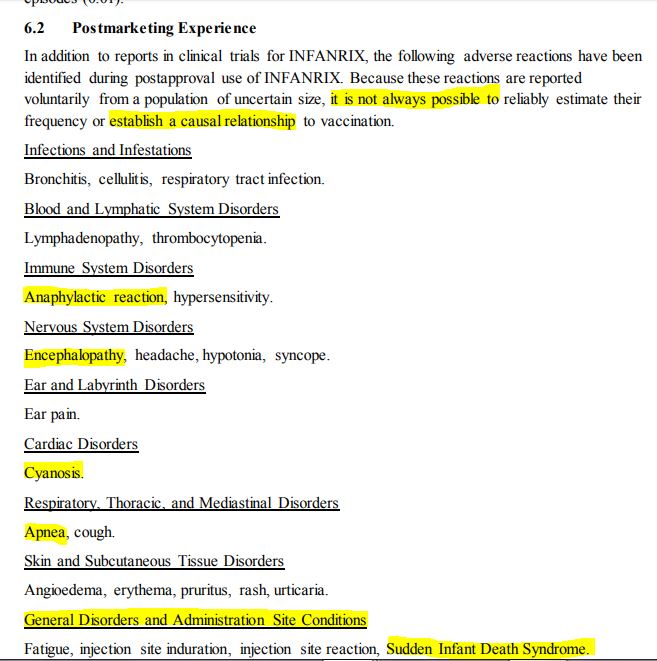 The fifth reference is the 2011 IOM report which was available to the authors of the first reference, analyzed above. This is the excerpt from the report regarding vaccines and sudden infant death syndrome  (emphasis ours):

With current recommendations calling for infants to receive multiple doses of vaccines during their first year of life and with sudden infant death syndrome (SIDS) the most frequent cause of death during the postneonatal period, it is important to respond to concerns that vaccination might play a role in sudden unexpected infant death. The committee reviewed epidemiologic evidence focusing on three outcomes: SIDS, all SUDI (sudden unexpected death in infancy), and neonatal death (infant death, whether sudden or not, during the first 4 weeks of life). Based on this review, the committee concluded that the evidence favors rejection of a causal relationship between some vaccines and SIDS; and that the evidence is inadequate to accept or reject a causal relationship between other vaccines and SIDS, SUDI, or neonatal death. The evidence regarding biological mechanisms is essentially theoretical, reflecting in large measure the lack of knowledge concerning the pathogenesis of SIDS.

The Institute of Medicine conducted this study and could not determine whether or not some vaccines did indeed cause SIDS.

Do you think there was a reason that the authors of the first paper didn’t refer to this IOM study? Do you wonder why the CDC included it in the “Related Scientific Articles” on a page that categorically states that vaccines don’t cause sudden infant death syndrome?

What do you think now?

After reviewing these two references, are you convinced that vaccines don’t cause SIDS? Do you think you are being lied to? Will you be a more critical reader next time?

How the CDC Squanders Tax…

Conflict of Interest at the…